Absolutely Blown Away By Visual Sciences

I walked into the presentation knowing that the product is black and probably visual. I walked out trying to figure out why, beyond budget, companies would choose a different solution if they could choose Visual Sciences. (I did come up with some, see the bottom of this post.)

First, they have developed the capability (a “visual sensor”) to capture data from all sorts of sources, not just the web. RFID, barcodes, text files, call center logs all qualify. So it is no longer just a web analytics package, it becomes a total analytic solution. I don’t think they like the phrase 360-degree view, but if that isn’t a 360, what is?

They have a proprietary database — and maybe that term is already too “boxy” — may be data storage or “place to keep their data” would be more accurate. This seems to be their primary secret sauce and enables them to relate data in any way you want. (They call this n-dimensional.) They aren’t working with a traditional relational database, so the number of fields isn’t constrained and it is no longer incredibly expensive to have someone crawl into the database and expand the fields (in fact, there is no crawling in.) I kind of dismissed this as Bob spoke – it’s an expensive solution so even if you pay for an extra 10 eVars from Omniture, you probably pay less money – but then, you might need that info now, not when the LiveSupport people get to it. In some ways, it is easier to compare it to Google Analytics, where you get one custom variable and no more, but the customer sets are so different than that becomes a senseless comparison (albeit easy to understand.)

It is amazingly easy to create whatever report you want. We were five people watching the demo, and we couldn’t come up with a single request for a report that Bob Chatham couldn’t create from scratch within 5-10 seconds.

Did I remember to say that the visualizations are to die for? Here is one from their website: 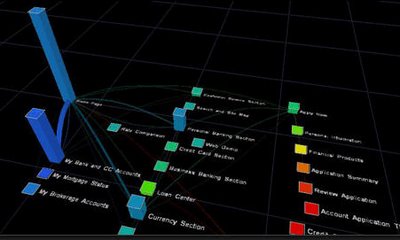 This screen shot shows paths through the site. The height of a bar is traffic to a page and the thickness of a connection from one page to another shows how much traffic flows from page to page (I wonder how you tell what direction the traffic is flowing?) I know that this screen shot doesn’t do justice to the visualization but it was the best I could do – hope you can see the three-D connectors in “the air,” I can barely see them in my preview of this post.

It’s real time. Almost all the other page tagging solutions are real time, but unlike VS don’t change while you watch unless you hit reload and wait 60 seconds.

So why doesn’t everybody buy it? First, it is really expensive. I don’t know exactly how expensive but I have a pretty good idea. So it’s not a solution you buy lightly, and you sure don’t buy it without a full-time analyst or a team of analysts or you won’t learn much. Plus, if you don’t have time or resources to learn everything from your standard high-end solution (SC, HBX, WebTrends etc), then it’s really not worth spending the money. And let’s face it (this is my usual soapbox) – most people aren’t getting as much as they should out of their free Google Analytics. In fact, most sites either don’t have analytics, don’t know that they have analytics, or don’t care (but I digress…)

Second, I think that the company would be smart to sell the product on its merits and not sell it against the competition so much. Maybe that’s just the IBMer in me (I was taught to NEVER mention the competition by name), but I think their product, in the right situation, solves so many problems that they don’t need to have a negative campaign.