Neat Freak's Nightmare: How To Cope With The GA Goals UI Shakeup

The new goal setup in Google Analytics is great, unless you want to organize your goals. Here’s how to cope until (fingers crossed) Google fixes it. 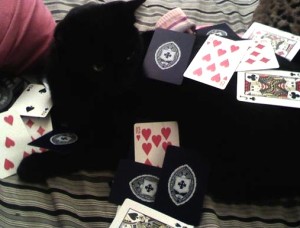 Let me start by saying I love the new, clean look of the goal configuration screens. I love that GA is always adding new features and making adjustments. Every week there’s a surprise, often a pleasant one. One of the best things in the new goal setup is the next to last step: “Verify this Goal.” Why, yes! Yes, I would like to verify this goal before saving it and wondering next week where all my goal data is. Or without taking several extra steps to verify my goal first.

I’m perfectly happy about the clean, new direction of the administrative UI, except for one thing. The goals list is a jumbled mess!

Previously when I looked at the Goals UI, the goals were listed in the order they appeared in my reports. First I had Goal Set 1, and any goals I had configured in that set, then Goal Set 2, and so on.

Now the goals are alphabetized by the name of the goal, without regard to how they appear in my reports. All my macro conversions are in Set 1 (and they still are), but I can’t easily see that in this list. 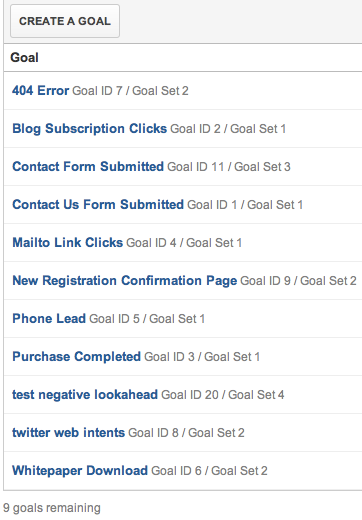 I don’t know why this list has changed. In my reports I still see my macro conversions on the tab for Goal Set 1.

Of course, the whole report setup could change. And perhaps a grand Google master plan will make it all clear why we had to lose the old ordering. I found a hint of that on the official support page for goal sets: it says, “This feature is retiring.” No more goal sets? I’m intrigued.

As far as I can see, each tab still holds only 5 goals each, aka a “goal set”. And so I want the order here to match the order in my reports.

Okay, this part is easy to fix. (But admittedly a pain.)

By adding a two-digit prefix to each goal name, the list will be ordered the way I expect the goals to appear in my reports.

I simply (and tediously) add a number to the beginning of the current goal name. At least the number is right there in the configuration screen and I don’t have to keep the list open in another tab to keep checking on it. 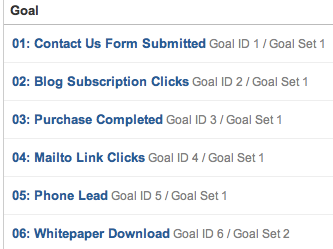 If you’re starting fresh, this isn’t as much of an issue… yet. But if you’re like me and had neatly organized goal sets, this is step one to coping with what I hope will be a temporary problem.

The next problem arises when I create a new goal. What number comes next? What set will it be in? Previously I could add a goal to an existing set or start a new set, among the four sets available to me in any profile. Now if I want a goal to appear in, let’s say, Goal Set 3, I may have a bit more work ahead of me.

When I select “create a goal”, by default GA will assign it to the next open slot, in numerical order. To create a new goal and add it to Goal Set 3, I’ll have to fill in any empty slots in the preceding sets.

Another tedious “solution”: create placeholder goals to fill in the sets until you reach the goal slot you want.

I just did this for a client who wanted a new goal in set 3, logically enough because the new goal was similar to the other goals in set 3. It belonged there. So I started creating placeholder goals to get to the next open slot in set 3.

I found the quickest goals to define are the goal types “Duration” or “Pages per visit” because I don’t have to enter anything except the goal name and then save. I can just leave the zeroes that are there by default.

Of course I don’t want to see these placeholder goals in my reports. To make sure they don’t appear (and don’t collect any data), I immediately turn the recording “off”. This setting appears in the list of all my goals, at the far right of each row.

When I’m ready to replace a placeholder goal with a real goal, I can click “Edit” next to the goal description.

“Edit” lets me change the goal name and the goal type. So I can turn all these Pages per visit type goals into URL goals or Event goals or Duration goals, as needed.

What’s Next After Goal Sets?

Just to be clear, I’m not going through all my goal sets everywhere and “cleaning house” with these “solutions”. I’m only using them when absolutely necessary to fulfill a client’s request.

I want to believe that the pain is only temporary. I hope that something even better is on the horizon.

If Google is retiring goal sets, it could be that the familiar Goal Set tabs in reports will change, too.

Maybe it won’t matter what the goal number or goal set is. Maybe we’ll be able to move and rearrange goals on a whim!

What’s your biggest beef with the new goals interface and how are you handling it? What do you think is the next big feature for goals in Google Analytics? Please share in the comments.