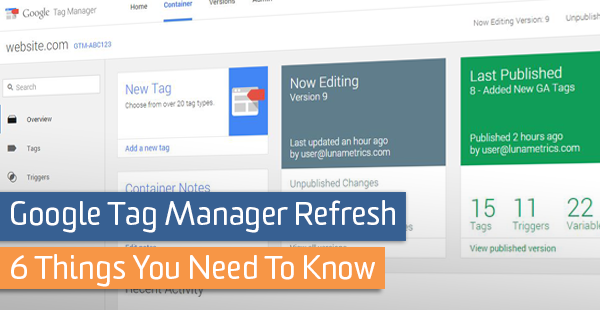 As you may have heard, Google Tag Manager has a new interface. You can read the official announcement, but we’ve got 6 of the most important takeaways below.

Google Tag Manager Version 2 is still in beta, but you can start using it now for new Accounts. To access the new UI, simply bookmark this new URL, http://tagmanager.google.com/. Already created containers will be available, but will continue to load the old user interface.

In January 2015, all users will have their accounts and containers migrated to the new interface, after which the old interface will no longer be available.

The new GTM has a clearer layout (mostly, though we’re still getting used to it here and opinions are divided on specific aspects). It’s also way more colorful (on which opinions are also divided).

One thing you’ll notice is that the navigation structure is much more unified in appearance with Google Analytics now than before: the top navigation and Admin areas are similar to GA’s, and the Admin area has especially gained clarity from this reorganization for account and container level settings. (This is also where you can Import/Export containers!) 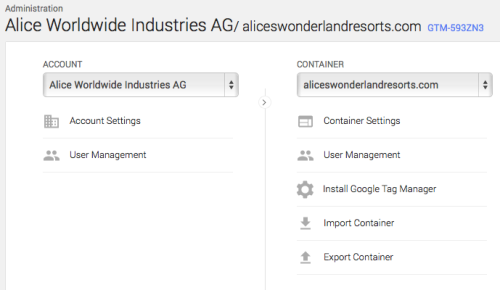 The new Overview also provides a clearer indication of the published version and how the current draft differs from it, as well as more apparent indications of preview mode.

What used to be called Rules (to define when a tag should fire) are now called Triggers. This isn’t just a terminology change, however; the criteria for setting up a rule (er, I mean trigger) are now presented differently (and probably in a clearer way if you’re new to GTM).

In the past, rules were just defined by a set of criteria, which could include a mix of comparisons such as “url contains X” and “event contains Y”. Now with triggers, first you select what type of interaction (i.e., a pageview, a form submission, a click, etc.), and then you can add additional criteria to limit which pages, forms, clicked elements, and so on that the trigger should apply to. It takes a more functional perspective to the purpose of triggers, although all the same criteria are available as before.

The new trigger structure also has an effect on listener tags. Previously on GTM, you saw that we created listener tags to trigger on events like clicks, form submissions, etc. We had to specifically tell GTM what to listen for by creating a tag.

Now, the listeners are implicit in the triggers you set up. If we create a trigger to listen for clicks on a specific kind of link or form, GTM just listens for those (without our needing to explicitly create a tag to do that).

This simplifies the learning curve with GTM, so especially if you’re just starting out, this will be a welcome change.

There’s another name change in GTM: Macros are now Variables. We’re OK with that, because “macro” never described what these things did very well anyway, and “variable” is a much better label.

You may remember that there are a number of built-in macros (er, variables) in GTM. In the new interface, we have the ability to only show those that are useful to you (so that you can declutter your list of variables to only those that you need). GTM’s interface separates out the list of built-in variables from those that we create. 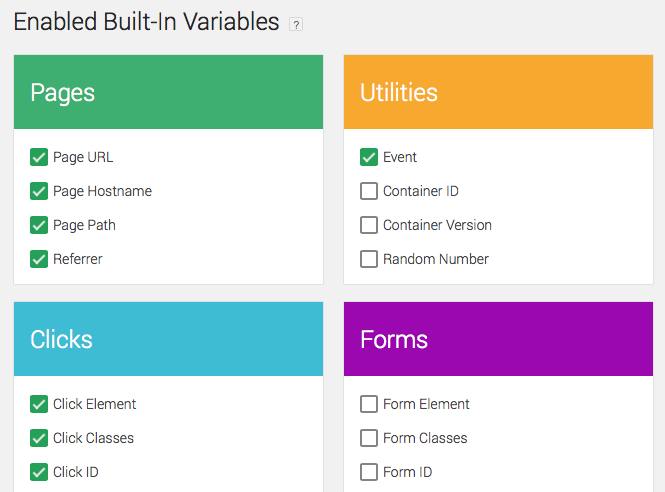 Along with the new interface, Google Tag Manager has officially announced an API which will make programmatic changes to your account easier than ever before!

Now you can manage user access, create master containers, and add remove Tags/Triggers/Variables. For an agency like us, we love this!

As usual, we’ll continue to write about GTM on this blog and we’ll have updates as they continue to come out. If you’re attending one of our GTM workshops, we’ll also be covering the differences between new and old and what you can expect if you’re migrating.

The news is just coming out, so we’ll keep this post updated with links to some other folk’s takes on the new GTM interface as they come out.