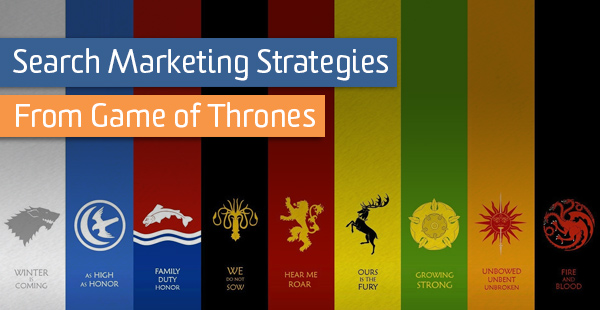 SPOILER ALERT: If you haven’t watched the first four seasons of Game of Thrones, you might not want to read this post. There are references to deadly events which have occurred in the show.

In Westeros, having and executing a cutthroat strategy is the only way to the top. The characters in Game of Thrones are concerned with little more than how to get what they want and fast. Each has their own talents, assets, and ideologies to wield to get their way in what is far from a level playing field. They have style.

After indulging in several seasons of triumph, defeat, and everything in between, we viewers can begin to guess what tactic a character will employ next. We understand the strategies set in place, and may find that we can even think like them. As a Search Analyst, it’s my nature to ask how we might apply their strategies in the real world. More specifically, in the world of search marketing.

Pardon my selection of characters, I’m clearly partial to the Lannisters.

She’s a loathsome queen that hates mostly everything and has some wicked eyebrows. She also happens to be my favorite character, but don’t let that tarnish my words. Her successful climb to power since season one can be credited to nothing but expert strategy building. Sure a few may have died along the way (including her husband and firstborn son), but it doesn’t stop her from relishing her power.

Ultimately, Cersei has friends in high places and always has. She presently sits on the small council (advisors to the King of the Seven Kingdoms) and belongs to the richest family in Westeros. She knows, above all else, that to get what she wants she has to make and keep friends in power who will do her bidding. This truth applies to search marketers in many ways, particularly those who work in-house for bigger brands.

Believe it or not, your interests as a search marketer aren’t universally held. You will have ideas and opinions that will not always be popular. From simple changes like asking to include more on-page targeted keywords at the expense of someone’s artistic vision, to complex structural changes to your brand’s website that your developers will want your head over.

In situations like these, it’s helpful to have a friend in power. Someone who’s respected within the organization and will add weight to your advice.

If you find that your expert opinions are being overlooked too often at the expense of your search strategy’s success, make like Cersei and find some friends in power. Just try not to have them killed for occasionally disagreeing with you. It might not work out in your favor.

Tyrion Lannister’s Approach: It Isn’t Worth Saying If You Don’t Have An Attitude

What he lacks in height, he makes up for in wit. This sharp tongued “imp” has played a major role in the story and quickly became a fan favorite. Brother and archenemy of Cersei, Tyrion Lannister knows how to makes waves of his own. He slapped King Joffrey when no one else would dare. Sure, it was risky, but he had a point to make with the twisted brat and so he did. Loudly and in style.

In the already established and still rapidly developing sea of content that lives on the internet, it’s hard to stand out. All too often professionals believe that in order to remain professional they must use a clean, and usually dull, voice. They believe this at their own peril.

Imagine a party. The room is filled with people of all sorts, some at the center of attention and others sitting alone in the shadows of the room. Why do some get more attention than others? It’s because they have interesting things to say and interesting ways to say them.

An audience may view your listicle of the top ten reports for search marketers in Google Analytics, but they’re not going to care. They’ll simply skim through the list and exit, ensuring that they already knew about the reports. Conversely, if you embody your personality in your writing, both good and bad, you’ll capture attention. So go ahead and throw a bitch slap every once in a while, you might become the fan favorite.

Varys’ (the Spider’s) Approach: Know What The People Who Matter Are Saying

Amongst all of the fierce strategy builders in Westeros, Varys may be fiercest. He’s free of many distractions, being a eunuch, and this allows him to stay focused on the end goal. He’s called the master of whispers, spymaster, and “the Spider” for secrets are his trade. He acquires his coveted information through a mysterious network of individuals which he calls his “little birds.” His network alone makes him invaluable to the Iron Throne.

Information is Varys’ currency, and as search marketers we can relate. When people who are totally unaware of the concept of keyword research are enlightened, they react as if you’ve opened a treasure chest before them. Like Varys, our job as search marketers (and behavioralists) is to know precisely what language users are querying with. We have to know what people far and wide, known and unknown, are saying.

Tywin Lannister’s Approach: There’s A Tool For Every Task, And A Task For Every Tool

Let’s get right to it. Tywin Lannister was a boss. In his lifetime he saw his bloodline seize and surround The Iron Throne, all while maintaining his House’s reputation as wealthiest in Westeros. He was smart, wise, and somewhat morally corrupt but it comes with the name. If there was anyone I’d want managing my daily budget, it’s this guy. After all, he was the Master of Coin.

Tywin was also a master of efficiency. Consider The Red Wedding, of which he was the mastermind. When questioned about the ordeal by Tyrion, Tywin replied, “Explain to me why it is more noble to kill 10,000 men in battle than a dozen at dinner.” Granted, it was more like several thousand killed than a dozen, but it’s the spirit of efficiency that matters here.

In paid search, especially when working with large budgets, it’s becoming less necessary to manage your budget on a granular level. For example, flexible bid strategies can be put into place that ensure that your ads are serving at the top of the SERPs (within your defined bid limits). If you’re not using bid strategies, or automated rules, you’re spending precious time working towards the same end.

For accounts with smaller budgets, shared budgets optimized for conversions can be an excellent management tactic that will save you time. With this saved time, you can put more of the tools available in AdWords to work such as dynamic search ads or remarketing campaigns. Remember that more time spent does not always yield better results.

Which character’s strategy style do you think would translate best into search marketing? Let me know in the comments, or tweet me @ChrisVella.