As digital marketing consultants, we field a variety of questions and concerns from clients. Something that frequently pops up is apprehension to using paid search on top of SEO, for fear of “cannibalization.”

“Why would I pay for an ad on a keyword I rank number one for already?”

These are reasonable concerns.

Why pay for a click you could theoretically get for free? Especially if you’re in the first position, where you’re expecting a 31% click-through rate on average.

But these fears are unfounded. We’ve written this before, but it bears repeating: When done correctly, PPC and SEO can work together towards a synergistic, holistic marketing objective (buzzword bingo!).

But before going any further, we need to set the record straight on cannibalization:

While paid search may take some clicks away from organic, a correctly-targeted paid search campaign will increase overall traffic.

Google ran a study a few years back which concluded that even if you are the first organic result, 50% of paid clicks were incremental, meaning that 50% of those paid clicks were not replaced by organic clicks when the ads were paused.

For those of you who aren’t math majors, that’s half of the traffic generated by PPC lost.

On the first page results for mobile, an average of 88% of ad clicks are incremental. That’s a lot of traffic organic can’t make up.

It’s All About Real Estate

The more real estate you can take up on a search engine results page, the better, especially as the number of organic results on the first page dwindles due to the rise of the Mega-SERP. Google has been steadily providing us with a dizzying array of ways to interact with results pages.

By providing more opportunities for users to engage with your site, you’re increasing the likelihood of a click. Assuming your keyword targeting is on point and your ad copy is killer, you’ve provided a relevant result for qualified traffic that more people are inclined to click on.

Take a look at the results page for the query, “google analytics training,” something near and dear to our hearts at LunaMetrics.

For this query, we rank third organically. Not bad.

But if you look carefully, we’re not even in view. We’re actually a full result below the page fold. The ads have pushed us out of view.

We serve ads in the top three positions for this query to combat this, but as you can see, that space is competitive. Our ads are usually in the mix with around 10 other ads.

And while we actively do SEO for our site, if we didn’t run ads for our trainings, we would be losing hundreds of potential visitors and thousands of dollars per month. But your decision to run ads should be based on your goals, budget, and competitiveness of the space.

Thankfully, if you do have a smaller budget, AdWords provides a pretty nifty report for you to determine which terms you might bid aggressively on and where to back off.

It’s called the Paid & Organic report and it’s available after you link Google Search Console (formerly Google Webmaster Tools) to AdWords. The report shows user search queries, and their respective paid and organic metrics. It also displays data when only PPC ads were shown, when only organic results were shown, or if both channels were shown.

If you have really high visibility above the page fold, you might reduce the bids on those keywords. Conversely, if you are low on the page, you want to bump it up to increase your visibility. You could even try pausing ads if you’re serving highly, but as that study indicated, there’s a good chance you will be losing a fair amount of traffic.

You can also use the report to determine where each channel is lacking for a certain keyword, and use this to strengthen and inform your SEO and PPC campaigns.

For more ideas on how to use this report, check out Stephen’s article here.

But What About Brand?

Branded searches are trickier to nail down. Generally, you will always be among the first results for a branded search unless something has gone terribly wrong.

However, it doesn’t mean you shouldn’t necessarily bid on it.

Everyone knows Apple. If you’ve typed “apple” into Google, I’d bet money you weren’t looking for the pome.

Every result on the first page for a search for “apple” has to do with the company. So surely they wouldn’t waste money on bidding on their name, would they?

It turns out they would. 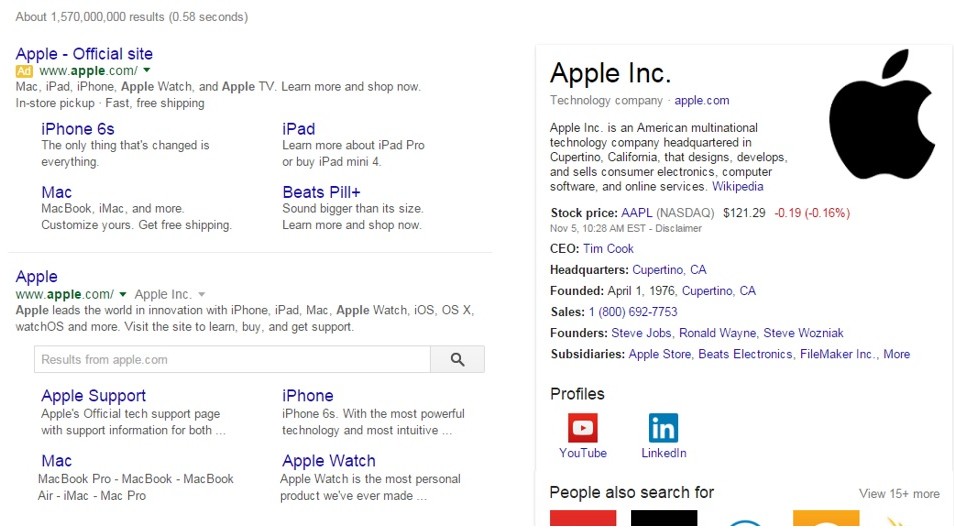 As you can see, they’ve dominated this page. Every link in the main part of the SERP above the page fold points to their site.

You could justifiably argue that they can afford to do this because they are worth more than the GNP of Switzerland. Fair enough.

If you’re a smaller business like everyone else, you will have to make a hard choice about whether you want to target branded terms. It will depend on your budget and how competitive the space is.

However, that won’t always stop competitors from trying to come onto your turf. For example, we have a client that operates in a competitive space, with CPCs routinely over $50 and sometimes pushing $75+.

A search for their brand name reveals 8 separate competitor ads, and the client’s own organic result barely above the page fold. They can’t afford to not bid on their brand name.

Granted, they’re an unusual case, but if you can make some room in your budget for some branded search ads, you’ll be able to beat any competitors AND capture more incremental traffic that’s also hyper-relevant.

A good way to leverage the strengths of each channel on branded (and even nonbranded) terms is by introducing:

Stephen used the example of Sears 3 years ago, so I revisited them again to keep the legacy alive. Turns out they’re still doing well. Something that they do particularly well that Apple doesn’t appear concerned about is how they leverage the visibility they have on the SERP.

Whereas Apple’s links and messaging are pretty much the same across their paid and organic results, Sears uses the power of SEO to build longevity and PPC to create urgency.

As Stephen mentioned, their SEO messaging is focused on essential brand messaging that is always relevant, and they’ve kept the same copy from all those years ago, meaning they’re playing the long game:

With their ads, we see benefits, savings, and time-sensitive deals (again):

Their PPC message takes the foundation of their organic message, and builds upon it, creating urgency and inspiring the consumer to act immediately.

Ultimately, the two channels are working towards the same goal: getting relevant results in front of users and driving that qualified traffic to your site. 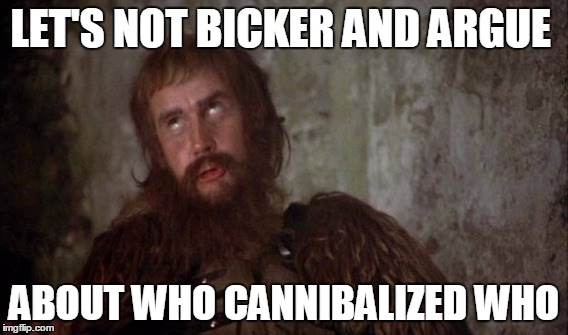 It can be a tricky balance, but if you get both firing on all cylinders and working in conjunction with each other, you’ll be in good shape!