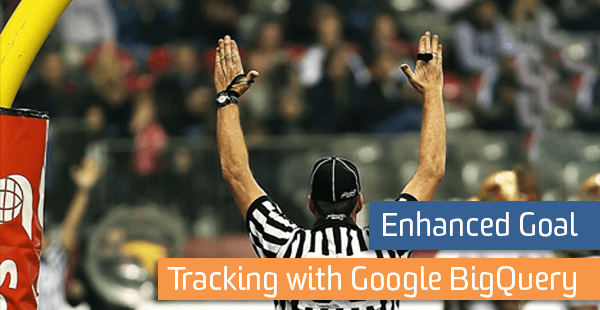 The Google Analytics interface provides many ways of analyzing your goal conversions, including goal set tabs, funnel visualizations, and goal flow reports. The Analytics 360 Suite also provides custom funnels that allow you to create retroactive funnels based on advanced criteria. However, the BigQuery integration with Google Analytics allows users to deal with even more specialized use cases. Below are a few:

Goals are defined in the Google Analytics Admin section and any changes only apply moving forward. However, the goal conversions are not carried over as a field in BigQuery. Instead, all goals must be defined by the analyst in a query or user defined function when the analyst creates a report. This gives the analyst flexibility to apply new goals to historical data based on the current needs of the organization.

Since goal definitions are applied retroactively, broken goals and conversion rates in historical data can be fixed in BigQuery reports.

Goals in Google Analytics can be created based on the URL of a webpage; an event category, action, label, or value; the amount of time a user spends on the site; or the number of pages the user views during a session. While these rules cover the majority of use cases, occasionally more complicated rules are needed. Below are a few examples:

This logic works well for many types of goals, such as Ecommerce or donation related goals. For other types of goals however, it makes more sense to de-duplicate conversions by user rather than by session. For example, application submissions or subscribing to a service or email list are more accurately measured by converted users rather than converted sessions.

By default, goal funnels in Google Analytics are based on a single session. Within the Google Analytics interface, custom funnels (for Analytics 360 users only) offer a powerful way to get around this, although they can only include up to 5 steps. Free users of Google Analytics can use user-level segments. However, these can only cover up to 93 days at a time. Funnels in BigQuery can go back as far as you have data and can contain as many steps as you need.

Understand Which Channels Move Users Through the Funnel

In addition to viewing the drop-off rate at each step of the funnel, BigQuery contains details about what the user did in between each funnel step. For example, how many people moved between funnel steps within the same session versus additional sessions? If the user required an additional session, which marketing channel brought them back during that session?

BigQuery can also help you analyze the amount of time spent on each step of the funnel. This is often of particular importance to companies who want to analyze how long it takes users to complete each section of a form.

The user ID view in Google Analytics ties together sessions across devices for logged-in users. However, this view excludes all users who did not log in, which may be a substantial percentage of your traffic. In addition, the user ID view does not retroactively apply the user ID to prior sessions on that device.

Once a user logs in to a device, BigQuery can tie together all sessions from that device and combine that data with sessions for users that did not log in. This allows for more advanced analysis for companies with long and complex buying cycles.

Through the BigQuery API, you can export detailed, user-level activity and conversion information to other reporting and statistical analysis tools. Many tools such as Tableau, Data Studio, Power BI, Google Sheets, Excel, R, and Python connect with BigQuery and allow for advanced data analysis and visualization.