What Can Google Tag Manager Zones Do For Me? 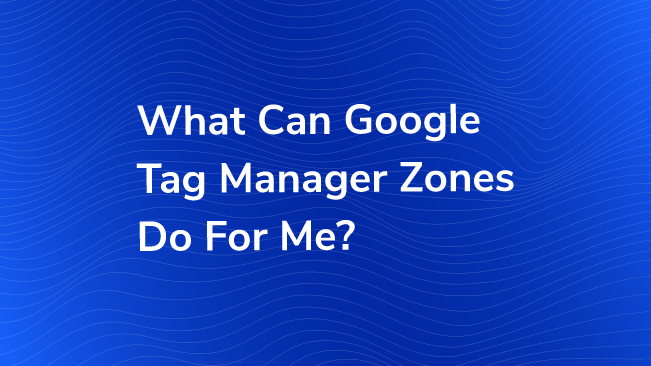 Enterprise organizations can now control who has access to publish Tags on their site and what types of Tags are available to publish with Google Tag Manager Zones, a new feature for Google Tag Manager 360, the enterprise version of Google Tag Manager available with the Google’s Analytics 360 Suite. The tools in the 360 Suite are focused on the needs of enterprise-scale analytics, and Zones specifically focus on the needs of organizations with multiple web properties, multiple stakeholders, and/or multiple agencies or partners. GTM 360 can be purchased independently, but more frequently comes bundled with a Google Analytics 360 implementation, so some may even have it and not realize it.

Not all organizations need Zones, so let’s help you decide if the Zones feature can solve a problem that you have. If you run a single website, and your analytics is done by a single team, then Zones probably won’t do anything that helps you. Zones solve issues of scale, of both the technical and organizational kind, by coordinating the ownership, control, and implementation of multiple tools across multiple web properties.

You should consider using Zones if any of the following statements are true for you:

We will cover each of these situations in more depth later.

Zones do NOT directly solve any of the following concerns, although they don’t get in the way either:

In short, a Zone allows one GTM Container to place a second (or a third, fourth, etc.) GTM Container onto the same page. You can access Zones within the interface via the left-hand navigation, directly under the Folders option. 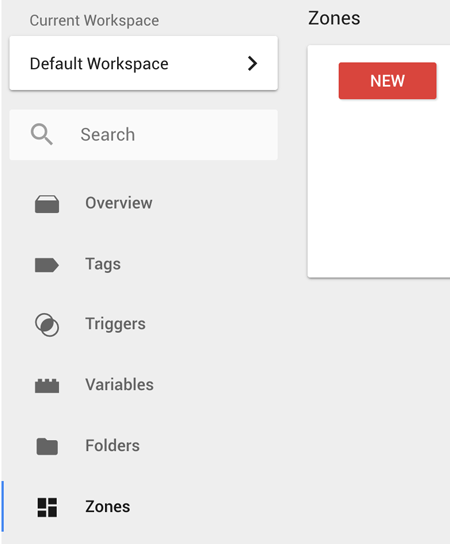 It’s possible, but not as secure, to put a second GTM Container on a page using Custom HTML tags instead of Zones. When you use Zones, GTM provides several safeguards, such as making sure the same Container isn’t included multiple times, and avoiding duplicated Events in the Data Layer (but NOT duplicated tracking!). As we will see later, Zones can also be configured to blocklist or allowlist certain features. 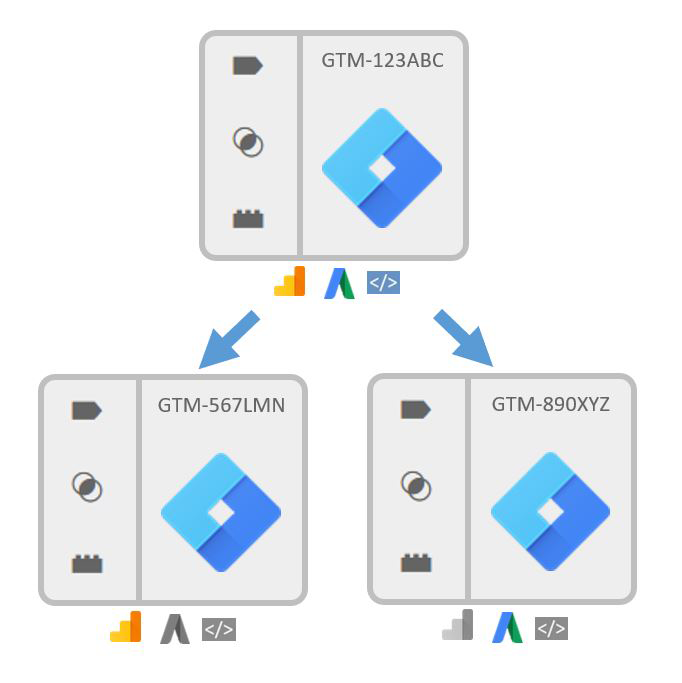 Google Tag Manager’s Zones support doc goes into more about the setup, and Simo Ahava has an excellent comprehensive guide on Zones as well, so let’s talk about why an enterprise organization might find value with container Zones.

Perhaps the most common example of this scenario is when one team manages the on-site tracking in Google Analytics, while a separate team is in charge of media tracking through advertiser pixels. Google Tag Manager is a great tool for managing the implementation of both of these tools, but having two teams share a Container runs into issues. If both teams can publish changes, then one team can inadvertently impact the other’s data collection, and the ownership of Triggers and Variables isn’t clear. If only one team can publish changes, then they become a roadblock for the other team’s data collection. If one or both of these teams are third-party vendors, then issues of responsibility and communication become even more pronounced.

Zones solve this issue by letting each team have their own Container. Then neither team can edit each other’s assets, and they don’t have to consult each other when publishing. One team’s Container will include a Zone for the other team’s Container, but other than that, very little coordination will be necessary. Setup is straightforward, you just need a GTM container ID. 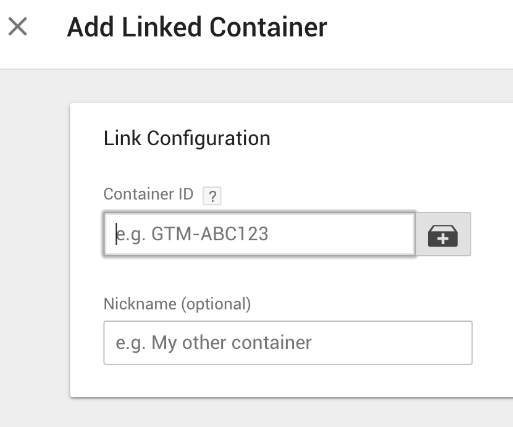 Some additional features of Zones may be useful in this scenario. For example, the Zone for the media pixel Container may only need to be enabled on a subset of pages, such as campaign landing pages. But the primary benefit is the separation of user permissions and publish cycles. All other Zone features are optional.

Many organizations are reasonably hesitant about running third-party code on their website. Some of these concerns relate to privacy and security of sensitive customer information, while others relate to site functionality such as load speed.

Some organizations balance these concerns against the benefits of tracking by allowing certain types of tracking only on some parts of the site. For example, third-party JavaScript may be forbidden in the Account Management area of the site but allowed elsewhere, or the built-in Form Submit trigger may be disallowed on some form pages but not others. Alternatively, an internal BI team may be trusted to write custom JavaScript code while a third-party vendor may not.

Zones help to make these rules practical to implement and enforce, by providing an easy interface for integrating with GTM’s existing Blocklist and Allowlist features. These features allow site owners to set fine-grained restrictions on the use of Tag Manager. The most common example is restricting custom HTML & JavaScript tags, but it can also be used to restrict tags by vendor, or to disallow specific triggers or variables. 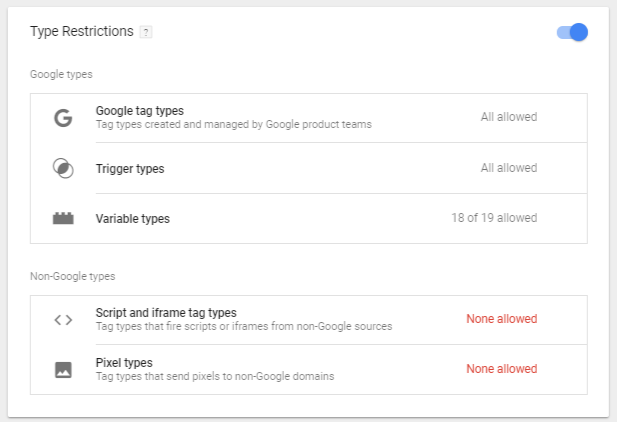 This is a great addition to the existing ways that Google Tag Manager addresses security.

Zones provide an easy way to manage what code is allowed to run on different areas of the site, by configuring access restrictions on certain Zones. You can also define Zones with the same Boundary but different access restrictions. This allows you to control who can place code on your site, rather than where they can place it, by managing access to the Containers in these different Zones.

Sometimes the best way to manage tracking across multiple web properties is by creating multiple Containers in Tag Manager, even if the tracking on these sites is meant to be compatible. This can be for a variety of reasons, including the use cases mentioned above in this post, but also commonly because the websites themselves have different underlying code, making it different to create tags and triggers that work the same way everywhere.

The most difficult situation is when sites are initially similar, but then evolve in different directions, either by having different features, or different release cycles, or updating at different times. While it may have initially made sense to use a single Container, you can find yourself needing to manage the transition to separate Containers, while also hoping that sites don’t share code and inadvertently include the wrong Container.

Zones can address this problem by having GTM manage the logic of which Container should be placed on which page. Rather than managing users and permissions, Zones can be used here just to manage which Tags, Triggers, and Variables are available on a given page. Only a single Container ID can be used across your web presence, with that Container choosing whether to provide its own tracking, or to load in a Container providing more specialized tracking for that particular website.

An important thing to note is that Zones do NOT allow different Containers to share assets. In particular, it is not possible to share a GA Settings variable between Containers. This makes it difficult to use Zones to provide “extra” GA tracking (using the same property ID), unless you take the care to manually keep the GA Settings Variables in sync.

Container Zones for Google Tag Manager 360 are a great new feature for enterprise clients, and really helps to differentiate the enterprise version from the free version. Not everyone will need this particular feature, but some have been anxiously awaiting the functionality and granularity this provides to teams that are used to juggling different stakeholders across many sites. Zones can change the way enterprise customers work internally, with their own departments, as well as externally with advertising agencies and partners like us, without sacrificing security or becoming buried in processes.