In July 2021, Google sunset its Gmail Sponsored Promotions (GSP) campaigns, and rolled all that Gmail inventory into the new Discovery Campaign format. While Discovery campaigns have proven themselves to also be pretty cost-efficient conversion drivers similar to other card or carousel social ad formats, they are not the only option now that GSP is gone.

Since Google's announcement, Bounteous has been testing multiple tactics to find other similar, or better, alternatives to Gmail ads. Yahoo In-Mail campaigns have proven themselves to be a viable option for those looking for more choices to replace GSP, and to supplement their Google Ads campaigns with an alternative media outlet.

What Are Gmail Sponsored Promotions Campaigns?

First of all—what exactly are these "GSP" campaigns we keep talking about? They used to be Google’s in-mail ad campaigns, which served ads directly to a user’s inbox, and had a similar look and feel to a normal email. When a user clicks the ad preview, it expands in the email viewing pane to show an engaging banner image and enticing ad copy. An interested prospect can then click the expanded ad in order to reach your website, with the goal of converting on the landing page. 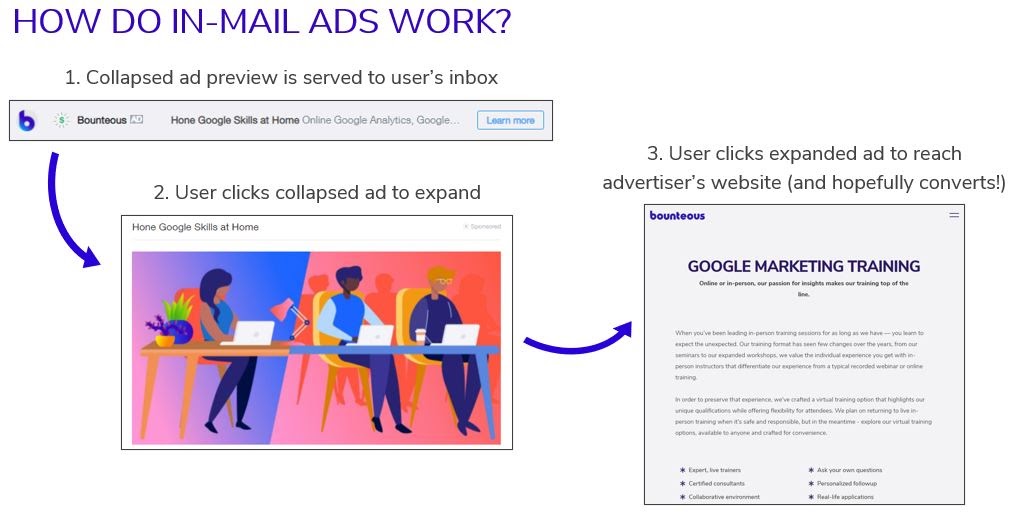 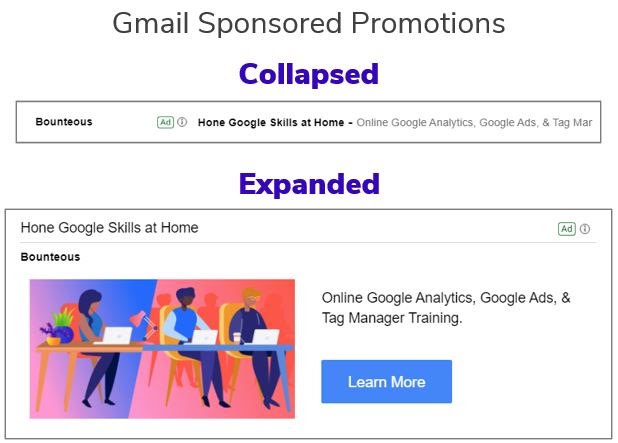 After June of this year, advertisers no longer have the ability to create new GSP campaigns or make any edits to their existing ones. Gmail inventory will now only be available through Discovery campaigns, which encourage users to discover and engage with your brand with highly visual ads powered by Google’s machine learning capabilities.

These new, mobile-centric Discovery campaigns aim to have users interact with ads serving in Gmail inboxes, on YouTube, or in users’ Discovery Feeds. Google’s excellent machine learning capabilities do most of the work for you, finding the most cost-effective conversions with little input from the advertiser. Campaigns are lower-funnel focused with only conversion-based automated bid strategies available (Maximize Conversions or Target CPA).

In addition to this engaging new campaign type offered by Google, advertisers may want to test more tactics alongside Discovery in order to compare performance and to target different stages earlier along the path to conversion. In this respect, Yahoo offers a few key benefits that can help round out your media plan. Yahoo In-Mail Ads have several different bid strategy options depending on your goals, including both click- and conversion-based bidding. Yahoo also allows advertisers to apply manual device bid adjustments, set constraints, and choose more customizable campaign options based on what they are trying to achieve with each media tactic.

In addition to these campaign features, adding Yahoo campaigns to your media plan opens up a different audience than advertising through Google alone. According eMarketer, Verizon Media (which acquired Yahoo in 2017) ranked #4 on the list of top media properties based on the number of unique visitors. Verizon Media had just under 215 million unique visitors in November 2020, compared to Google’s 268 million.

To try to tap into the wealth of inventory and new audiences via Verizon Media, Bounteous decided to test Yahoo In-Mail campaigns. These are essentially the Yahoo Mail equivalent of GSP, and are ads that look like regular emails and serve in users’ Yahoo inboxes. Once the user clicks the collapsed email, the ad expands in the email viewing pane, and high-intent users can click through to the advertiser’s landing page. 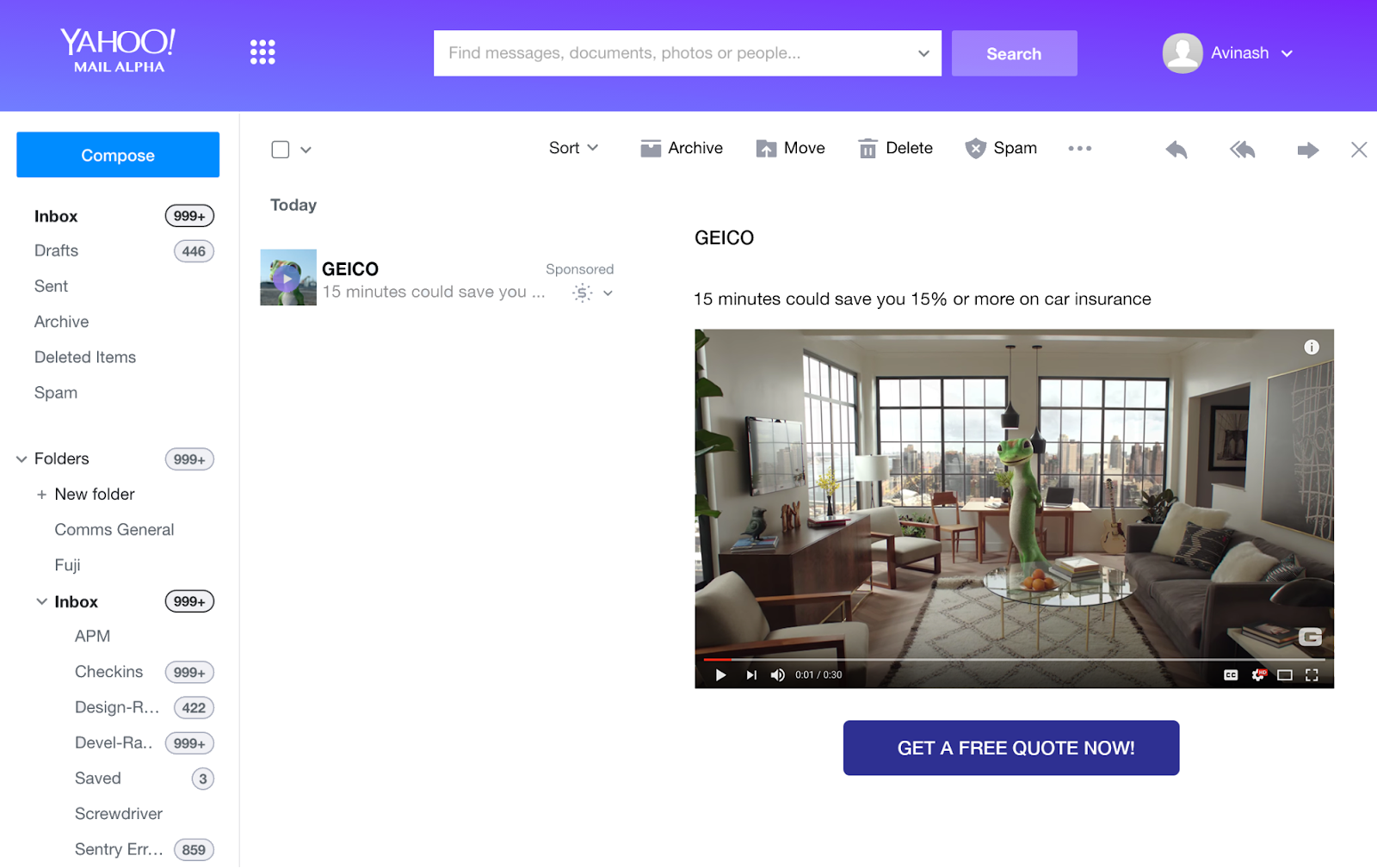 For this particular test, Bounteous integrated Yahoo In-Mail campaigns into a banking client’s media plan to run side-by-side with other tactics such as GSP, Google paid search, and social media. Historically, this client generally saw paid search and GSP campaigns as the top performers in terms of cost per acquisition and conversion volume. However, by the second half of 2020, Yahoo In-Mail ads became a surprising source of cost-efficient conversions. By the end of the first flight, Yahoo was able to drive a 45 percent lower CPA than paid search and a 65 percent lower CPA than GSP, due primarily to the success of the "Small Business Owners" Verizon Media Audience.

During the second flight, Yahoo solidified itself again as one of the most efficient conversion-driving channels of the entire campaign; and in fact, budget was shifted away from other tactics mid-flight to ensure Yahoo was fully funded. While Yahoo’s CPA increased a bit from the previous quarter (by 17 percent, and partially due to expected seasonal cost increases for the industry), it was almost equal to paid search’s CPA and was much better than Gmail’s CPA, which clocked in at roughly 22 percent higher than Yahoo. Success this time was primarily attributed to the Verizon audience "Business Decision Makers," which on its own drove a CPA 31 percent lower than the average across all campaign tactics.

Yahoo In-Mail campaigns, particularly those targeting Verizon’s third-party audiences, have proven themselves to be strong performers in this test, with performance and costs comparable to, or better than, paid search and GSP. As Google sunsets their in-mail-only campaigns, and advertisers experiment with alternative tactics, keep in mind that Yahoo In-Mail ads could be one conversion-driving tactic worth giving a shot.

Step One: Login to your Yahoo Ads Manager account, or create a new account if you don’t have one yet.

If creating a new account, make sure to add funds and set up billing profiles before proceeding.

Step Two: Create your desired conversion rule(s) under the Tools menu, and follow the instructions in the platform to properly tag landing pages. 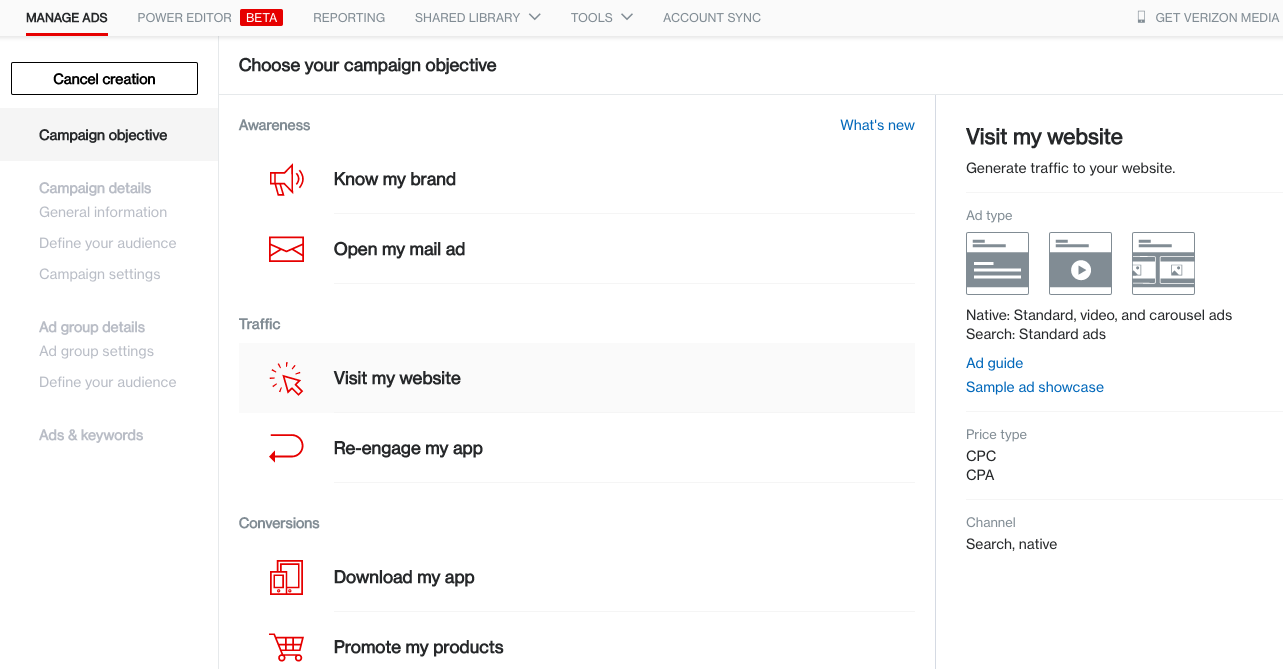 Step Five: Add a campaign name, and choose "Native only" under campaign type. 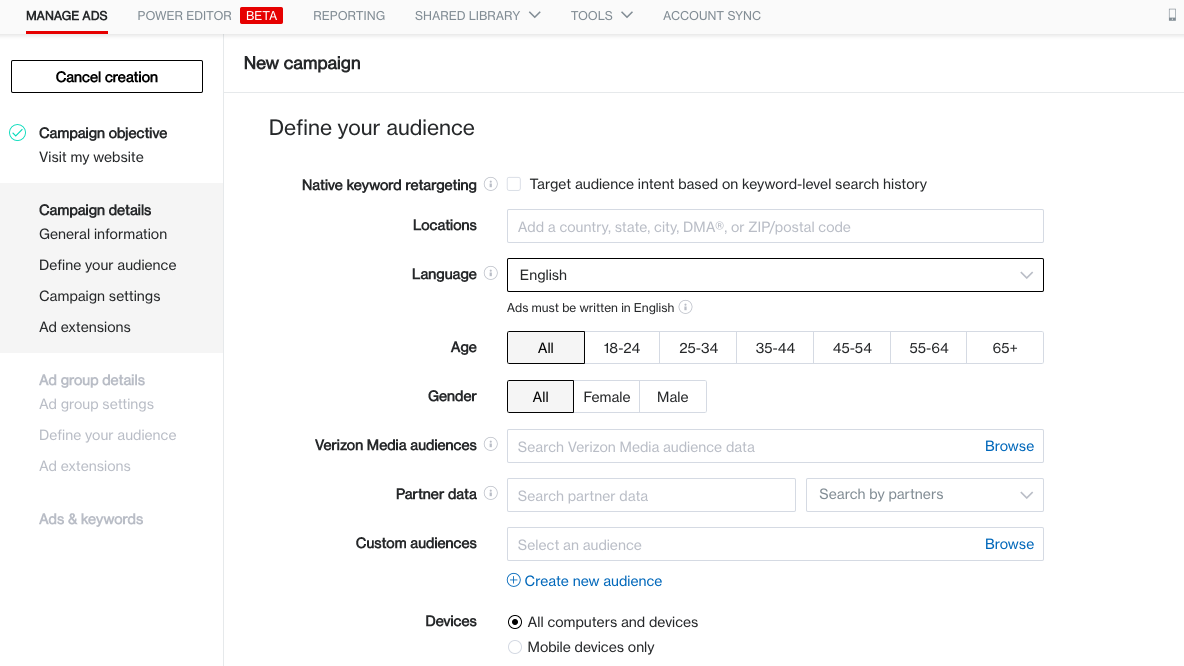 Step Seven: Set campaign budget and bid strategy. To get the most out of your Yahoo In-Mail campaigns, choose a conversion-based strategy to drive desired user actions (Target CPA, Maximize Conversions, or Enhanced CPC). 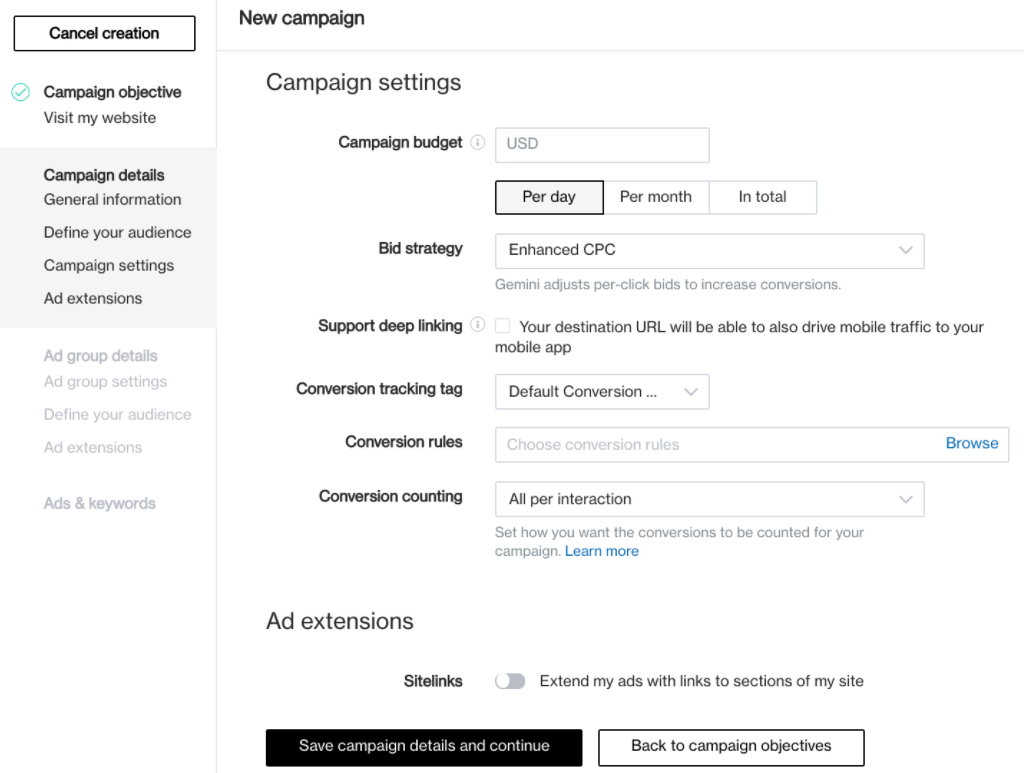 Step Nine: Create a new ad group and add a name. Select a start and end date (if applicable) and average bid. You have the option to use campaign-level targeting settings, or choose specific audience settings for each ad group. 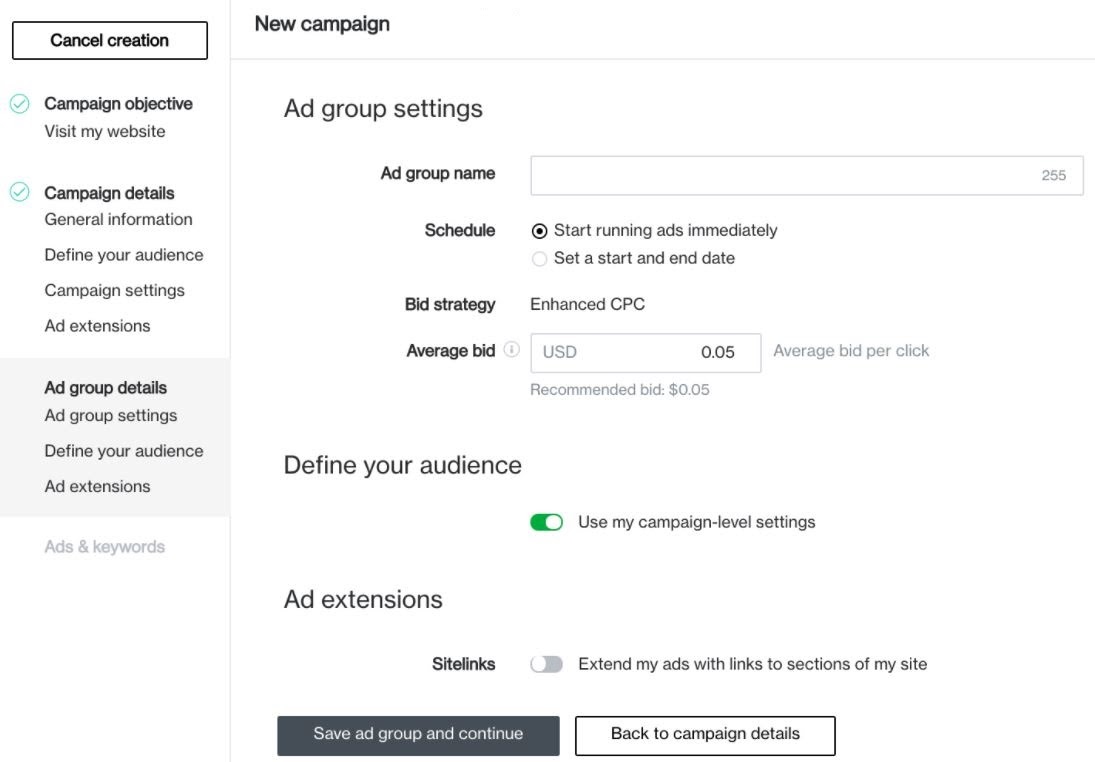 Step Ten: Create an ad within the new ad group. Add a:

Advertising through Yahoo provides a unique opportunity to reach different audiences than just using Google alone, and, in our experience, these campaigns have proven their ability to effectively convert users. If your company is trying to find a replacement for the sunset Gmail Sponsored Promotion Campaign, or you’re just looking for a new media outlet to test, Yahoo In-Mail Ads could be an easy addition to your media plan as a great source for cost-efficient conversions. 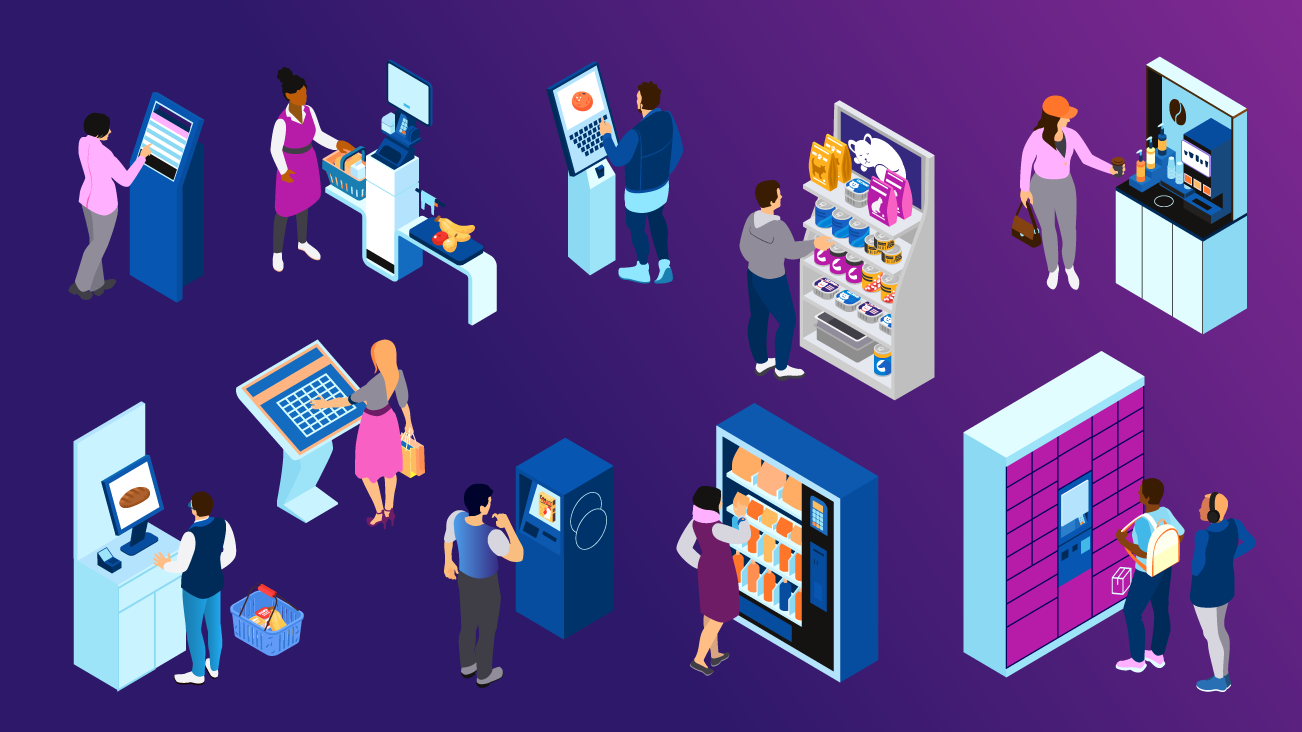 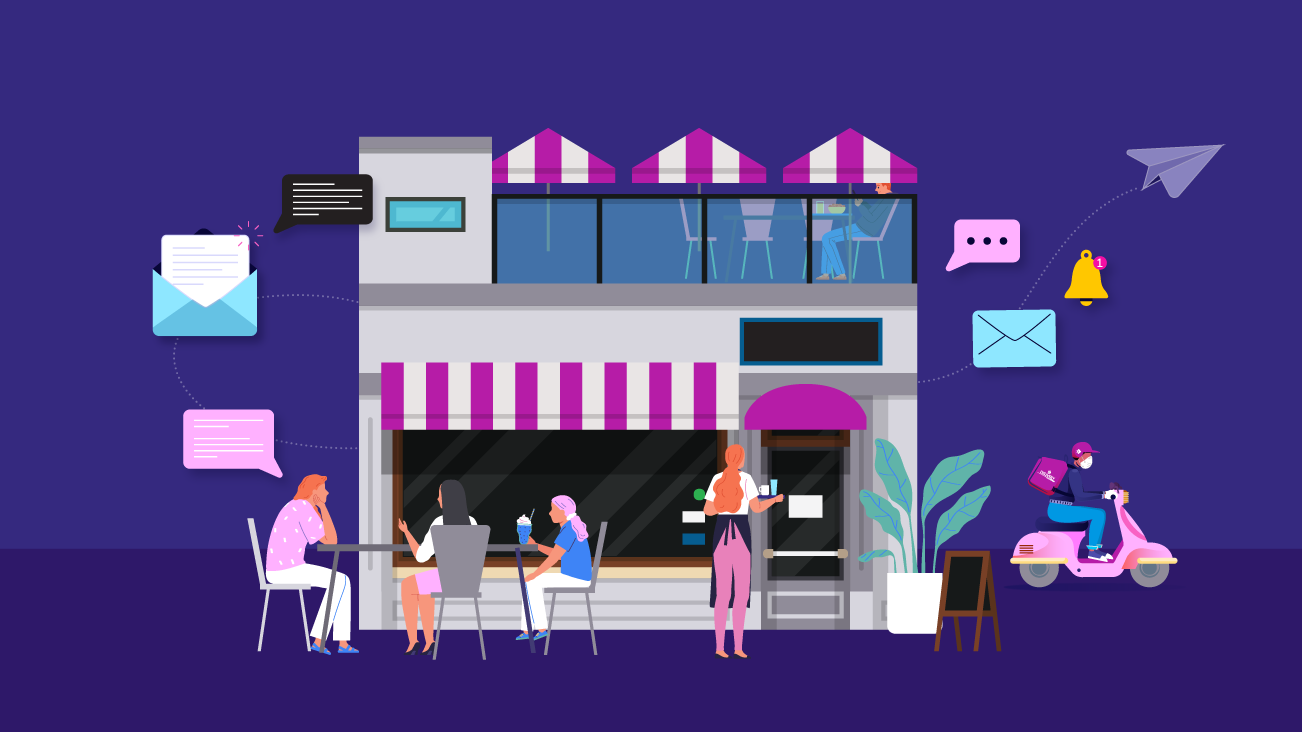