Measuring Buzz For Your Topic

Recently, I subscribed to BlogPulse Analytics. (Well, ok. I haven’t handed them the $24/year it will cost me to be a real subscriber. But I will.)

Anyway, BlogPulse has a number of free analytic tools that anyone can use to find out what kind of buzz is going on among bloggers. Need to know about the buzz on Mark Warner vs. Hillary Clinton? (After all, Warner was on the front cover of today’s NYTimes Magazine.) Put each of their names into the BlogPulse Trend Search and Get Trend. Here’s what you see: 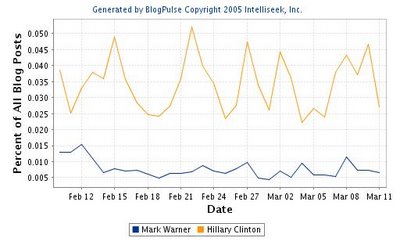 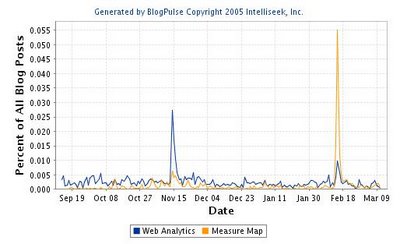 Anyway, use the tool for your own purposes and enjoy.