The Growth Of (Not Provided)

With Firefox poised to make HTTPS encrypted Google search its default search engine, the black hole of keyword referral data lumped into (not provided) in Google Analytics appears likely to experience another major growth spurt. After this news soaked in, I felt compelled to examine the growth of not provided. Here’s a look at the history, current state, and predicted future of the growth of the keyword that accounts for the most visits and conversions in the Google Analytics accounts of most webmasters the world over – (not provided).

The news broke almost a week ago. If all goes according to Mozilla’s plans, the default search for the Firefox browser will soon be https://www.google.com rather than http://www.google.com. HTTPS stands for “hypertext transfer protocol secure”, and is normal http with a layer of encryption – in this case ssl (“secure sockets layer”) – added to prevent unwanted leakage of information to third parties.

As of now, Firefox hasn’t yet reached the Beta stage for rolling out the new secure search. Firefox reportedly stated pretty clear intentions to move default secure search forward in the next few months. They have Google’s “go-ahead” and are currently testing the change for technical issues, and will then release it to its Aurora and Beta channels soon.

What this means, of course, for the many marketers and webmasters that rely on Google Analytics, is that they will not be able to see which keywords were used when Firefox users reach their websites via Google search – instead, these search will be lumped into the ever-growing (not provided) keyword referral group.

How much has (not provided) grown so far?

That’s the burning question I had inside, so I decided to raid the data stores. I slapped together raw, unfiltered data for 30 websites on the quantity of visits from Google nonpaid (organic) search and the amount of these visits whose keyword was (not provided).

The period of time for the data set was 24 weeks, from November 9 to March 24, a little before (not provided) first starting showing up around November 18, when Google stopped passing on keyword referral data to Google Analytics from users signed into their Google accounts. The websites were somewhat randomly selected for a diverse data set. To facilitate speed and diversity, I made a few exceptions to random selection: all sites used had more than 1,000 and less than 100,000 monthly organic Google visits, were mature sites, and were unique root domains. In addition, no more than 3 sites from the same client were selected. Because we can do so without leaking private info, we’ve shared this data with you. (And we’re not even going to make you pay for it;)

Below, you can see the growth in the proportion of keywords referred from organic Google searches. The purple line is (not provided) over all 3 million+ organic Google visits from all 30 sites. The other lines are the median and the average of the sites’ (not provided) percent of Google organic traffic. 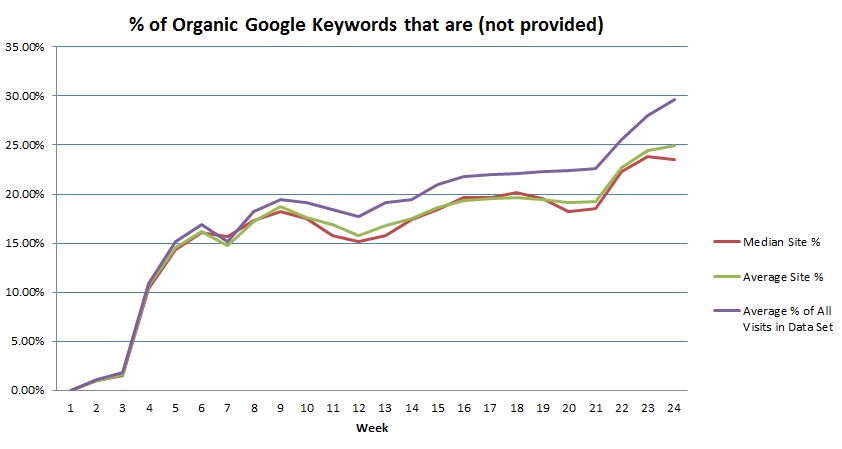 The line that probably gives the best indication of proportion of (not provided) is the red median line. You can see an initial explosion and then growth actually trailed off for a while. Then, towards the middle (not provided) again continued its ascent; this is likely due to the roll-out of Search plus Your World, which is enticing users to sign in to Google more often. Then, in week 21 growth explodes: this is because Google implemented its privacy policy changes on March 1, which tied all Google accounts together. For example, if someone was signed in only on YouTube and performed a Google search, the keyword they used would not be (not provided) in February but it would be (not provided) if they performed that action in March.

In the graph below, I’ve plotted the percent of organic Google traffic lumped in (not provided) for each of the 30 sites for the week of March 18 to March 24. 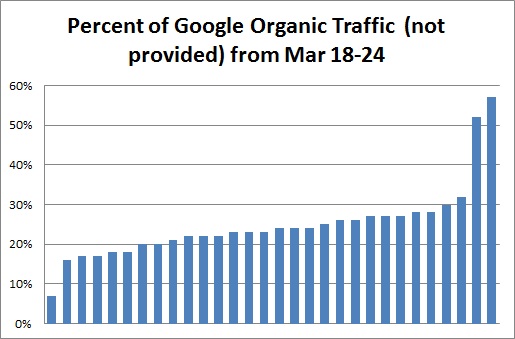 You can see that there are 2 “outliers” with over 50% of organic traffic being (not provided). Both of these sites are on the subject of web analytics/web marketing. One of these site is LunaMetrics.com – many of our readers (like you?) are signed into Google Adwords or Analytics as they read our blog for tips. Thus, the figures for the averages may be a bit inflated. The median figure gives the best indication of a websites “typical” % of (not provided), which appears to be 22-24%. It seems as though Matt Cutts’ prediction was a tad conservative.

How Much Will (Not Provided) Grow in the Future?

A lot. Probably. Don’t be surprised to see that figure of 22-24% climb a little, albeit at a slower rate, over the next few weeks as the current trend continues. Then, if Firefox moves forward with making encrypted search their default – and I really think they will – expect (not provided) to explode. We don’t know yet exactly when and how they roll this out, but we know that, if Firefox moves forward, eventually almost all the visits to your site from Google organic search performed on Firefox will be lumped into (not provided). It is estimated that Firefox controls nearly 25% of the browser market, so the increase will be dramatic.

I’ll go on record as predicting that, by the 2012 holiday season, the majority of websites will see 40-50% of their keywords from Google organic search in Google Analytics lumped into the (not provided) category.