Google AdWords - A Year In Review

It’s that time of the year when people reflect on what they’ve accomplished, learned and mayyybbe a few goals from 2013 to push to 2014. Bloggers undoubtedly fall into this category. The SEM blogosphere (which is an official word on Merriam-Webster) is flooded with articles about goals and learnings from 2013.

I’m taking a similar approach but also using this as an opportunity to do a “year in review” of 10 Google AdWords biggest changes and best additions. If you are familiar with LunaMetrics, you know that we run Google AdWords trainings all over the country. To say that we updated our training slides a few times this year to keep current would be an understatement. AdWords kept us on our PPC toes. Perhaps this list of changes and additions in 2013 will introduce you to a new feature or provide a friendly reminder that it exists! 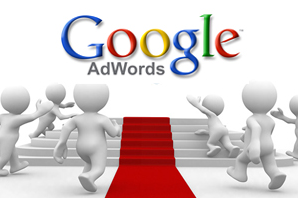 ^This represents us AdWords advertisers running to keep up with the changes.

I’d be remiss if I didn’t mention Enhanced Campaigns first and foremost on my list of the most earth-shattering AdWords changes. Now having been used to Enhanced Campaigns for six months, I can’t even remember “the old format.” While the masterminds at Google rocked our PPC worlds with this change, I honestly believe that the way in which we manage campaigns is more streamlined and specific features made my account management life easier. Here are a few of my favorite things from Enhanced Campaigns:

This update, announced in October, definitely caught the attention of AdWords advertisers. It’s not often that Google changes how Ad Rank or Quality Score is calculated, but all of that changed on October 22nd. Ad Rank is calculated by taking into consideration an advertiser’s max CPC bid and Quality Score. Now with Google’s update, they started to factor in the “expected impact from ad extensions and formats.” Moral of that story is advertisers without ad extensions such as sitelinks, call extensions or location extensions needed to rush to implement so as to not have a lower Ad Rank compared to their competition. Takeaway: if you don’t have ad extensions running right now, stop what you’re doing and add them!

Seems that consolidation and simplification was the name of the game in 2013. We bid adieu to the Keyword Tool and Traffic Estimator and said bonjour to the Keyword Planner. As with any tool, it took some time getting used to this one, but just as with Legacy Campaigns, I don’t even remember what either of the old tools look like. Here’s a few of my favorite features of the Keyword Planner:

Also a note on consolidated tools – AdWords also combined the Contextual Targeting Tool and the Placement Tool into the Display Planner.

One of the best features about Enhanced Campaigns that I called out earlier is that everything can be scheduled. Literally, everything. My personal favorite is the ability to schedule ad extensions. Only want a sitelink to run during certain hours of the day, or for a specified time? No problem. This makes sitelink customization a much more attainable goal. 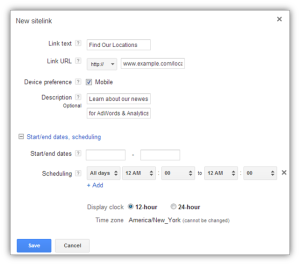 Test it out with sitelinks, and don’t forget to think about when and why you would want to schedule the following: Call Extensions, Review Extensions and App Extensions.

Hands down this is one of my favorite new features in AdWords purely as a time-saver. Pay attention to the very bottom of the calendar range in the AdWords UI and turn on the compare option: 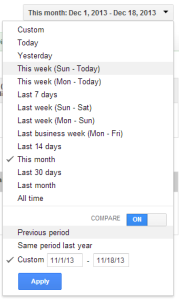 In just the click of a few buttons, you can now compare any time frame of your choice. Gone are the days where you need to export and pivot data to do clean comparisons. I swear by this report to identify significant performance changes.

Ever wish that you could analyze Paid & Organic data side by side to determine keyword performance in both channels? Done. Google rolled out this trusty report in August, giving advertisers the opportunity to analyze PPC/SEO performance and whether or not Paid Search is guilty of cannibalizing organic search traffic. Check out this article by Sr. Paid Search Analyst, Stephen Kapusta that describes the inner workings of the Paid & Organic report in the AdWords UI.

Enhanced Campaigns’ roll out in July was the biggest feature to transition us into the multi-screen world. Three months later, a new conversion column, Estimated Total Conversions, was added to the UI. The first conversion type to launch as part of Estimated Total Conversions is Estimated cross-device conversions. Pulled directly from the AdWords blog announcement, “estimated cross-device conversions are counted when a customer clicks an ad on one device, then converts on another device.” The intent is to use this data to understand ROI and make better bid and budget adjustments.

8.) Calls rolled into the main “Conversion” column in AdWords

Starting to identify a mobile trend in AdWords changes in 2013? This update also fits that bill. Starting on November 12, Google announced that phone calls from mobile click-to-call ads were added to the Conversion column allowing phone call conversions to be used with bidding solutions like Conversion Optimizer. Take a look at your data starting on 11/12. Did you see a significant uptick in conversions starting on that date? That’s probably why.

This was another significant change that started to creep up towards the end of the summer. As we were getting ready to switch out sandals for boots, Google was also making some style changes and started altering the appearance of ads on Google.com. Here’s a snapshot of the mobile ad landscape: 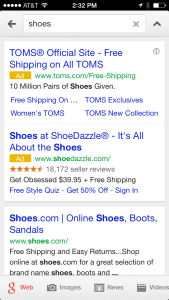 A few things to note:

Have you noticed a dip in CTR in the past couple of months? Specifically on mobile? When these types of changes roll out I always wonder about the impact and whether or not it will be positive or negative…

Last, but certainly not least, is the new layout of the Opportunities tab. 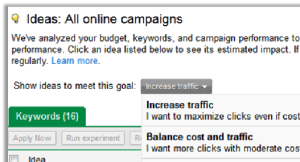 Much cleaner look compared to the old version, right?

Not only does this report look different, but there are some functional changes. One of my favorites is the ability to view opportunities for a specific campaign vs. the entire account. It’s also broken down very clearly what you can do from a keyword, ad group or ad extensions perspective.

I could easily add 10 more updates, but if you’ve made it this far, you’re probably ready to move on. 2013 was an exciting year for Paid Search. To see this number of makes me wonder what’s in store for us next year.