20 Google Facts & Stats That Every Marketer Should Know

No company dictates the online marketing industry and all of our careers like Google. Regardless of whether you use the company’s products, your customers do and that leaves you no choice but to become a Google expert.

This post outlines 20 things that every marketer should know about Google. Some are huge (and somewhat unimaginable) dollar figures. Others are market share percentages. The one thing they all have in common: you need to know them.

If we missed any important facts, please let us know in the comments.

Google controls 67.6 percent of the US search engine market, well ahead of silver medalist, Bing, which has less than 20 percent.

Google projects that 90 percent of its revenue this year will come from digital advertising. About 20 percent of those earnings are from the Google Display Network.

Google will make $44 billion in ad revenue this year by owning 31.45 percent of the global digital ad market, 20-something points ahead of the runner up, Facebook.

Last year, nearly $9 billion of its ad revenue came from mobile. That number is expected to increase with mobile adoption.

Android operating system holds roughly 80 percent of the global smartphone market with about 1.6 billion units around the globe in 2014. Android’s 76 million users in the US make up about 50 percent of the market (compared to Apple’s 40 percent).

The industries with the highest cost-per-click (CPC) on AdWords are insurance, banking then legal.

Studies suggest that the top organic and paid spots in the Google search results get about twice as many clicks as the second spots.

There are more than 500 million Gmail accounts with 1 billion Android installations. 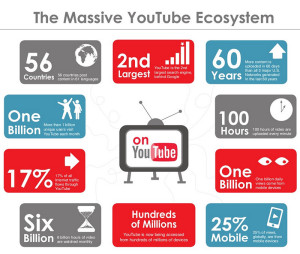 IBM and Microsoft have long been the leaders of business email. Surveys found that only one of the Fortune 50 use Gmail. Look outside of big business, however, and the story changes. In 2014, 60 percent of mid-sized businesses used Gmail and 92 percent of startups. As the next corporate generation matures, expect for Gmail to grow with them.

Chrome just broke 20 percent of the browser market, putting it in second place, but still well behind Internet Explorer.

Google Analytics is used by somewhere between 10 million and 25 million websites worldwide and various surveys suggest over 50 percent of business websites (both large and small) use Google Analytics.

To google is a verb recognized by Merriam-Webster (and most people on the North American continent). As a verb, and not a proper noun, googling is not capitalized. Google, the company, is capitalized.

There were only 20 slots so lots of Google facts and statistics did not make the cut. Are there any that you think should be on the list? Please share in the comments.