Which Google Analytics Attribution Model Should I Use?

Like with many questions we face with Google Analytics, we don’t have a “one model to rule them all” answer when it comes to attribution models, and that’s a good thing. A great feature of Google Analytics is your ability to customize the reports to your needs, and attribution models are no exception! This blog will go through the options and some examples for each one so you can make a well-informed decision when building your reports.

The model comparison tool that I will be covering will look specifically at attributing goal conversions and eCommerce transactions to different sources.

If you read through this blog and still aren’t sure which attribution model to use after, don’t worry! You can change your mind about which one to use, and even compare different models side by side. The Model Comparison Tool does not change the data in any way. It simply tells you how much each channel contributed to a conversion, based on how you feel your conversion cycle functions.

If you would like to follow along in Google’s public data on the Google Merchandise Store, and do not yet have access to it, visit our blog on this account and all the ways you can benefit from being able to review the data.

Let’s begin! To find the attribution reports, follow the menu options for Conversions -> Attribution -> Model Comparison Tool. You first need to have goals and/or Ecommerce data available in the view, otherwise Google Analytics will not have anything to attribute your traffic to. 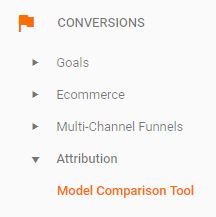 Once you are on this report, you will see a drop-down that let’s you chose which model you would like to view or compare. We have quite a few options! Don’t worry, we will review each one so you can determine which model will work best for you. 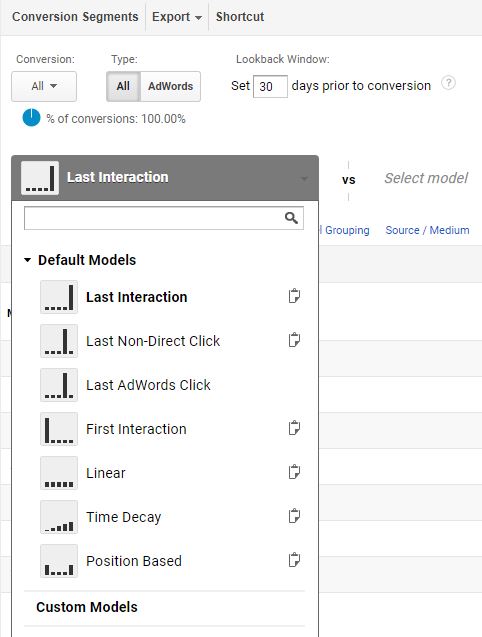 This is what is used in the Google Analytics reports by default, and most people are okay with it  for daily reporting needs. This method gives credit to the last known campaign or effort that a user entered from before converting. You can think of it as the last piece of marketing that convinced the user to convert.

But what about the email campaign? Without that, I would have never known about the sale you were having and I wouldn’t have searched for your site, right? If you find yourself asking that question, Last Non-Direct may not be for you in this situation. In this case, the last marketing effort that I saw was the Google Ads campaign, and all of the direct visits after that are ignored.

This model is normally good for sites that have a very quick conversion cycle, like online clothing stores, because people can convert quickly and frequently and are normally convinced, or not convinced, by the latest marketing offer they saw.

Here is a little golden nugget of info for you regarding other GA reports and this attribution method: If you run a campaign for a set period of time, you may still see the campaign come up under Acquisition -> Campaigns -> All Campaigns for a few months after it closes. Why? Because the campaign report looks at the number of sessions you have within that designated time frame, and then shows which campaign they came from most recently under Last Non-Direct Attribution. This will continue to appear in your reports until those users enter through a new campaign, or until the 6-month standard campaign timeout has ended.

I don’t see this method used too often because people want to know which marketing effort the user interacted with before converting, not if they just typed in their URL and converted. However, if you just want some quick metrics on where users came from most recently, this attribution model has the answer for you!

After looking at the other models, this one is probably pretty clear. Last Google Ads Click will give the conversion credit to the last Ads campaign that the user clicked on, even if that same user clicked on a few email campaigns after Google Ads.

Why would you look at this one if a later campaign is what convinced me to convert? Well, Google Ads has a clear cost for those clicks, so you can see a return on that spend amount. Email campaigns have associated costs too, like the labor costs of creating, deploying, and maintaining that campaign, but you probably don’t have those exact costs ready at your fingertips like you do for Google Ads.

For more information on conversions and Google Ads, check out our blog on the differences you should expect to see!

This is the “How did you hear about us?” model. First interaction attribution, or first click attribution, could be a good option for new companies and websites because in the beginning you really need to get your brand out in the market. After all, no one can complete a conversion with you if they don’t know about your company.

Let’s say I want to buy some sweatshirts. I normally look in the same places for new options, then either purchase then or wait for things to go on sale. Your company just started and sells clothes, so you run Google Ads and a number of social media campaigns to get the word out, then I click on your Facebook ad and purchase two weeks later after seeing other ads on Google and Instagram. Facebook will get the conversion credit for this because that is how I was introduced to your company.

In contrast to the others that refer to “Last (something)”, this looks at all the efforts that a user interacted with before converting. This can work with larger conversion cycles because there probably wasn’t just one piece of marketing that closed the deal for a consumer, rather it was a long period of exposure and consideration.

Does this sound more like how your conversion cycle sounds? Great!

This model looks at each method that the user entered from and assigns an equal amount of credit to each one. Let’s say I click on 3 emails and 2 Google Ads over 4 months before converting. Each one of those efforts gets 20% of the conversion credit.

Similar to the Linear model, Time Decay looks at all of the marketing/campaign efforts that a user entered from leading up to a conversion. The main difference between this one and Linear is that the older the marketing campaign, the less credit it will receive and the most recent entry will get the most. This method can also be used for conversion cycles that take a long time.

This model fits when you believe that each touchpoint is important, but after a while, historic marketing efforts become less important as they are forgotten.

Personally, I prefer Time Decay over Linear if I have to choose between the two.

If none of these fit your fancy, you can create a custom attribution model to apply to your reports! Within the custom menu, you can select one of the other models and use it as a base, then tweak it to your liking. When I am in this section, I normally use the Time Decay and Position Based models as a starting point, then modify how I want the credit to be distributed, or how long a campaign can live in the report before it is removed.

Data-Driven Attribution is extra special. Instead of a standard model, this is an algorithmically-generated model that is available to Google Analytics 360 customers and looks at all the touchpoints that users have before converting. Google’s algorithms then reviews the data and determines which channels were the most effective across the large group, and at which point they are most effective.

This is not a static model like the others, but a model that changes as your data changes to monitor the most effective channels for your site.

In order to use the Data-Driven model in Google Analytics, you must first be a Google Analytics 360 customer, and also meet the following requirements over a rolling 28-day cycle:

Dorcas covers Data-Driven Attribution and some of the key differentiators in her post, as well as how to get the most out of the feature with a smart Google Analytics setup.

For more information on GA 360’s Data-Driven modeling, visit this link to Google’s support documentation. Continuing with the “no one model to rule them all” idea, Google is working on a new product, Google Attribution, which will allow all Google Analytics users to connect other Google Products, like Google Ads and DoubleClick, to a custom model that will help with current attribution questions, and help predict future conversions. Alex talks more about these new products in his article.

You have so much data, and so many ways to look at it. Now you have different ways to give credit for completing different actions on your site, but what should we do next? Use it, of course! Here is an example for you: you may spend a lot of time sending out emails to bring people back to your site, and maybe you also pay for a lot of social media campaigns. Do you want to see how they are working? I am sure you have already looked at your campaign report to see which email/post is helping the most, but now you can compare emails to your social media efforts, for example, and make decisions on how to spend your marketing budget in the future.

In the end, these reports should help you make business decisions – so happy reporting and planning, everyone!